XXIIII
the priestly tradition
1And the academics sometimes supposed that the priests had woven the traditions together. 2And though they weren’t sure when or how it happened, a majority supposed that it was not Moses but some who counted themselves descendants of Levi and Aaron, the brother of Moses, who composed the majority of the books of Leviticus and Numbers as well as the first chapter of Genesis. 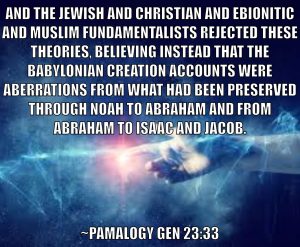 3And the priests sometimes used the name YHWH after Moses learned the name and at other times they used Elohim. 4And they preferred the name El Shaddai, Almighty God, prior to the burning bush. 5And their distinct contribution to the Torah, according to the academics, was their obsession with things pertaining to the Tabernacle, with counting people and possessions and with kosher laws and the covenants first with Noah, then Abraham, then Moses.

covenants and laws
6And these are the covenants given to Noah and Abraham before the covenant with Moses was recorded. 7The Noahic covenant promised that God would never again destroy the world by flood. 8And the sign of this covenant was the rainbow, which was for all of Noah’s descendants, which was all mankind. 9And there were no conditions attached to the Noahic covenant other than a law set forth prohibiting the eating of meat while still alive with its blood.

10And the Jews later supposed there were seven laws implied from this and as many as thirty or even a hundred that applied to gentiles, many of them punishable by death, of the 613 mitzvot, which were the total number of laws obligatory to the Jews under Moses. 11And these rabbinic speculations are available to this day in the Tosefta, in Ulla, in the Talmud, in Nahmanides and in Maimonides. 12And all stem from this covenant with Noah hypothetically added or modified by a priest:

13“Every moving thing that is alive shall be food for you; I give all to you, as I gave the green plant. 14Only you shall not eat flesh with its life, that is, its blood. 15Surely I will require your lifeblood; from every beast I will require it. 16And from every man, from every man’s brother I will require the life of man. 17‘Whoever sheds man’s blood, by man his blood shall be shed. 18For in the image of God He made man. 19“As for you, be fruitful and multiply; populate the earth abundantly and multiply in it.”

20And the Abrahamic covenants promised to Abraham that many nations would be born of his descendants were three. 21And a number of academics supposed that a Yahwist said God would bless those who bless him and curse those who curse him. 22And it was an Elohist who promised Abraham’s descendants all of the land from the River Euphrates to the River of Egypt. 23And it was a priestly writer who added the sign of circumcision.

24And despite his white lies before Abimelech regarding his wife Sarai, whom he said was his sister, some of the Jewish rabbis regarded Abram as a follower of the Torah before it was written by Moses. 25And circumcision was binding on all who would join themselves to the Jewish community. 26Therefore when Paul later denied the need for circumcision because no work of the Law could save his teaching was rejected by the Jews.

timing of the priestly writings
27And the academics, including Jewish academics in the third Millennium CE, believed that most of the priestly writers did not offer their contributions until Judah was in exile under Babylon. 28Verily many even doubted the very existence of Noah, Abraham and Moses. 29And they supposed that this priestly wave of writings was not completed until the temple was under reconstruction after the Persians had freed Israel from Babylon. 30And this late dating, they said, explained their apparent familiarity with the Babylonian writings of the Enuma Elish and the Epic of Gilgamesh, which were known throughout the fertile crescent by then. 31And they taught that the common knowledge of these Babylonian legends and their worship of Marduk was a helpful back drop for the Israelites to contrast their God with Marduk, demonstrating an orderly creation that was well made. 32Thus the first chapter of Genesis was not to be understood as a historical account but as a literary device.

fundamentalist interpretations
33And the Jewish and Christian and Ebionitic and Muslim fundamentalists rejected these theories, believing instead that the Babylonian creation accounts were aberrations from what had been preserved through Noah to Abraham and from Abraham to Isaac and Jacob. 34And from Jacob to the twelve tribes and to Moses, who put it in writing. 35And all of the many religions of the Earth, they believed, were tainted with error but had sparkles of truth sometimes since their legends all started with these patriarchs who populated the whole human race after the flood.

36But some of the Ebionites did not accept the Torah as untainted. 37For they believed that the priests introduced sacrifices of animals. 38And they rejected the Levitical tradition. 39Indeed, they believed that Jesus had come to correct this error. 40For prior to the flood, humankind did not eat animals. 41And for this reason they retained Scriptures uniquely their own.

conflicting priestly traditions
42And some of the priestly writing favored the sons of Aaron. 43And others favored the sons of Zadok. 44And all these were sons of Levi but not all were given the right to serve in the Temple. 45And it was supposed by the academics that there were confrontations with the people of the land concerning this, when the Zadokites returned from exile. 46And some of the writings such as the story of the rebellion of the Korahites were added to emphasize the legitimacy of the sons of Aaron. 47And the fundamentalists supposed these writings had existed unchanged for the prior thousand years.

48And thus it was that the Jewish tradition included much that was contrary. 49And there were many opposing opinions recorded in the Talmud in the centuries that followed. 50But held in common still was the general idea that God spoke to and through community. 51And this separated Jewish, Christian and even Muslim monotheism from the monotheism of Plato and the Greco-Roman philosophers.

52And so it is little wonder that there had been certain disagreements about the priesthood in Israel. 53For not all retained the same Scriptures. 54And communities rarely remained united as they multiplied.

60And it came to pass in the time of Jesus that the high priests were chosen by Roman appointed Idumean kings even after the Hasmonian dynasty was established by the Maccabees and the second temple had been rededicated and purified after its desecration by the Ptolemaic king Antiochus IV Epiphanies. 61And the academics argued that the priests had many interests unique to themselves as the Hebrew Scriptures were created but mostly reflected those of the exilic and post exilic period when the Temple was being rebuilt. 62And Jesus was thought to have said destroy this temple and I will raise it in three days. 63Was Jesus himself then a priest forever according to the order of Melchizedek?

prophecy in priesthood
64And the second temple was destroyed in the year 70 CE as the Christian records reflected and as it was said Jesus predicted, though the majority of academics did not believe in predictive prophecy so they assumed such things were written after the fact. 65Even so, many found in the work of the priests many prophetic types and shadows. 66And despite their experience as a people who had united in the bonds of suffering, the Jews did not envision that the covenant promises to Israel would involve the suffering of their Messiah, and most especially that they might have had a hand in his assassination. 67This instead they attributed to the Romans. 68And the evidence was attested to by multiple witnesses. 69For all four Gospels accepted by so called Orthodox Christians recalled a sign above the cross indicating he had aspired to be the king of the Jews. 70His punishment was therefore not for their sin but his insurrection, they were taught.

71And after the temple was destroyed a second time, the synagogues were the remaining places of worship in which the identity of the Jewish people was maintained. 72And the rabbis taught in them and kept and added to their records. 73And together they held opinions about Jesus that were very different than the Christians. 74And some even of the Pharisees believed and were converted but their opinions varied. 75And most of what could be ascertained by the Jews concerning Jesus came through his followers after his death.

Melchizedek of the gentiles
76And the Christians increasingly saw Jesus as of two natures, fully divine and fully human, yet as distinct from the Father as the Son of God, the only effective mediator between God and man, being paradoxically and unconfusedly both, ultimately transcending the priestly Law attributed to Moses. 77And such was the order of Melchizedek as they saw it, without generation.